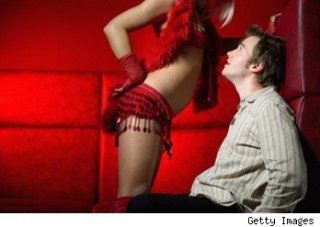 Whether it’s the $14 beers or the way the bartender has to duck whenever a dancer spins around the pole, there’s just something about strip clubs.

Of course, some people enjoy them more than others. Take, for instance, James Clooney, who ended up with a nearly $47,000 tab after a fun night out at the Penthouse Executive Club in Manhattan.

Clooney charged steaks, liquor and lap dances to rack up a bill big enough to buy a 3-bedroom house in Kansas. According to the club, he’s since made some small payments, but nothing big enough to put a dent in his debt. So, they’ve filed a lawsuit against him, seeking $46,698.18.

This got us thinking: surely James Clooney isn’t the first guy who’s gotten a little heavy-handed with the free champagne and ended up slinking away from a massive strip club tab. Turns out, we were right. A lot of people want to party like rock stars, then wake up the next day, covered in credit card receipts and shame.

Keep reading for the biggest strip club debts to date.

5. $28,021
In 2004, Mitchell Blaser filed a lawsuit against a Manhattan Scores for overcharging him — to the tune of $28,021. He says they ripped him off. They say: You can’t buy five magnums of champagne and hundreds of lap dances and not expect to pay a pretty penny. Not helping Blaser’s case is the fact that he signed receipts for every purchase.

4. $29, 512
James Hackett of Andover, Massachusetts, filed a dispute against a $29,512 charge to his AmEx made at Club Paradise in Las Vegas while he was in town for a convention. His defense? Somebody took his wallet and then returned it to him while he was sitting in his hotel bar. He doesn’t know what happened after that because he drank so many martinis while watching a Red Sox game that he blacked out in the lobby. Riiight. Because nobody ever gets blackout drunk and goes to a strip club.

3. $53,000
At Club 10 gentleman’s parlor in Okaloosa, Florida, a young Tommy Slater decided to celebrate his college graduation. He told employees he had about $600 to spend, but his bill came out to $53,000. Whoops. Later the club agreed to drop $39,000 of the charges, because they were made illegally after hours, leaving the total amount owed at $14,000. If he didn’t have post-college debt to pay off before, he does now.

2. $130,000
A Bangladeshi diplomat’s husband landed himself in hot water and lost his wife her job, when he managed to spend nearly $130,000 in just seven hours at Scores in New York. The bill was spread out over four credit cards, with no expenses itemized. Tauhidul Chaudhury disputed the charges, saying he was intoxicated (ya think?), and that Scores kept plying him with alcohol. Scores responded by saying that Chaudhury «partied like a potentate» — which we personally think is kind of a weird thing for a strip club representative to say.

1. $241,000
The granddaddy of all enormously out-of-control, unpaid strip club bills? The $241,000 tab that Robert McCormack, an executive from Missouri, managed to rack up at Scores. McCormack refused to pay, admitting only that he had probably spent only $20,000, which is still quite a few clams to throw down on lap dances and cocktails. A lawsuit involving McCormack, his (former) employer Savvis Communications Corp., Scores and American Express was eventually settled confidentially out of court. A hat’s off and slow clap to you, sir.

Looking back, we guess if there’s one thing to be learned from all of these tales, it’s to operate on a strict cash-only basis at strip clubs. And also, never, ever go to Scores, because that place is crazy expensive.